skip to main | skip to sidebar

We have a NEW Knot-y Girl's
Stitchery Club Blog!!!

We just put a free little pattern on it just for this occasion!!

This blog will no longer be updated...everything on here already, is on the new blog! YAY!!!
No comments:

Come Stitch With Me!!!!
I'm getting ready to leave for the Leavenworth, WA Quilt Show this weekend (September 7,8,9)  The weather is going to be gorgeous (Leavenworth and the mountains around it are gorgeous enough, rain or shine!)

I'll have tons of quilts and things there, and I'll be doing demos of coloring and stuff......but what I REALLY want is COMPANY!!!  Bring your stitching stuff, and come by!  You can sit with me and stitch! 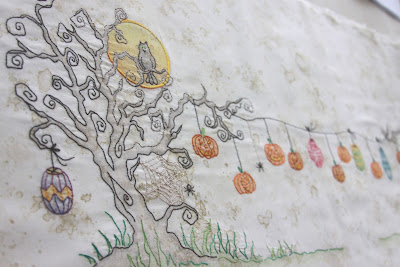 Well, I'm getting everything ready for classes at the Quilted Moose this weekend!  We're doing Halloween a little bit early !!  Their class patterns are the happy little skeletons below. 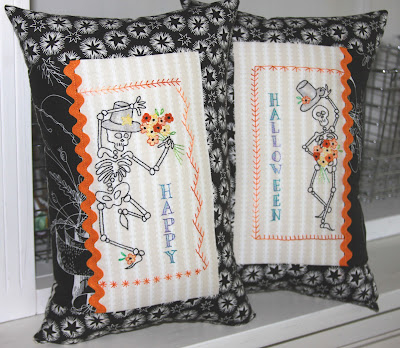 The Trees with the Jack-o'-Lanterns and paper lanterns hung between them is from a new quilt called "Dance By the Light of the Moon".  I really love the sparkle floss used for the spider webs!  Speaking of floss!.... We got an order from Cosmo yesterday that filled in quite a few holes in our supply! YAY!!!!  I'm really happy that they're starting to fill orders again!  They had re-tooling/re-warehousing/re-lots of stuff that affected the availability of their floss, and it really hit us hard!  It seems like things are getting back to normal and we'll be able to get our kits available again soon.  Thanks for being patient!!

The skeleton pillows are made with my new fabric line for Lecien, "Inkwell".  We should have that fabric by then end of this month or early September.  We'll get kits cut for Vintage Tin, Harvest Hopscotch, and "Dance By the Light of the Moon" as quickly as we can.  OH!!!  We also got several bolts of the cream colored Linen for A Gardener's Alphabet!!  If you were on the waiting list you've been called or emailed already to let you know we have it ready for you.  We'll have the linen on the website before the end of the day.......in fact it's going up as we speak! YAHOO!!!

If you're going to the Quilted Moose classes this weekend, see you there!!!  We're going to have SO MUCH FUN!!
xo Meg 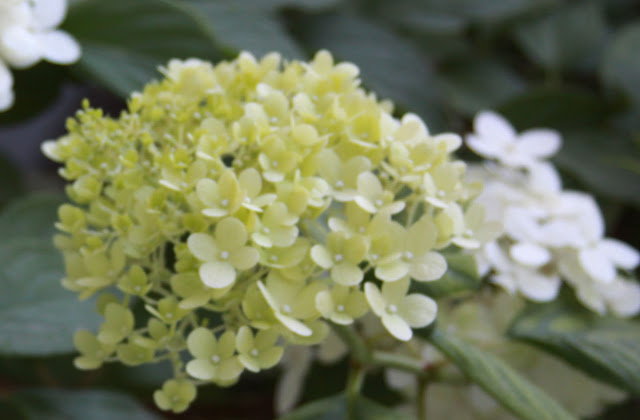 Well... the new website was launched in the wee hours last night!  We've spent several hours today trying to get our email back...something about the new website using a different server messed it up (blah,blah,blah computer talk that doesn't make sense...) Anyway, it's fixed now! YAY!!!  We're still fine tuning the site so some little things will change here and there over the next week or so.  By the time we're done, every pattern will show which flosses are used on it..stuff like that.  I hope that you'll like it and that it will be easier to navigate.  We'd started having SO MUCH trouble with our old site (it actually started just randomly deleting products!)  It was more than time for a change.  This website is using all the new technology (translates to "all the bells and whistles") and we'll be able to add some other things as time goes by.  Check it out!  If the link from here doesn't work properly just go directly to www.crabapplehillstudio.com.

We'll be working on the blog next and trying to get it up to date.  I tend to start computer-y stuff out of necessity and then not know enough about it to keep the workings up to date.  NOW I have two or three people here with me who know all about it, so maybe they can drag us into 2012!!!

All of the new releases are on the website... we just got the linen used on A Gardener's Alphabet in today! YAY!!!  So we'll start cutting it and filling the orders we have on the waiting list.  When we get those filled, we'll put it back up on the website.  I ordered fabric today for all of the new quilts so we'll have kits for those in a month or so too!

Browse around on the new website!  If you find anything that doesn't work properly PLEASE let us know so we can fix it ASAP! 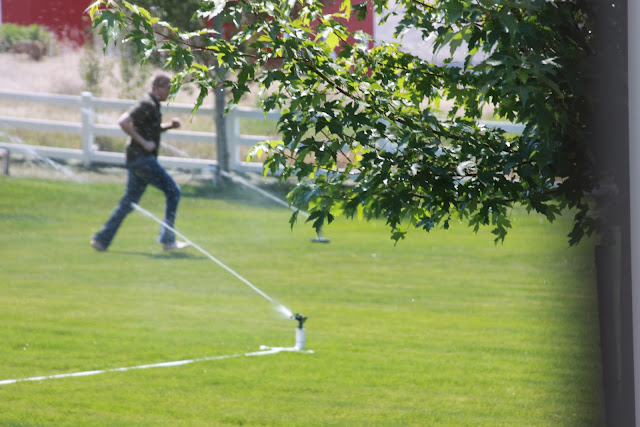 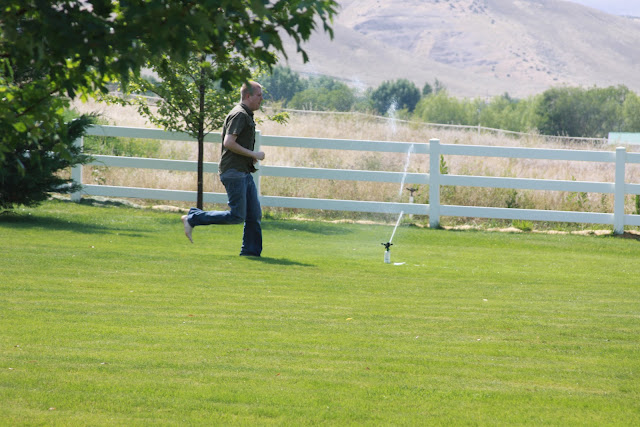 A few more minutes of this heat and we'll all be out there!  The A/C guy is coming (he just called to say he's almost here) so HOPEFULLY this'll be an easy fix and we'll be up and running right away.  It's supposed to be hotter tomorrow! YIKES!!!!  I'm thinking about sending my Jon into town to get a big kiddy pool....we could all sit around it outside in the shade......wonder if we can hook up the computers outside???  Can you say "electrocution"??  Hope your air conditioning is working!  xo Meg 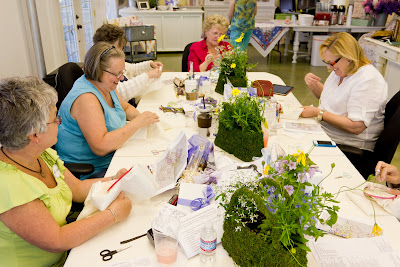 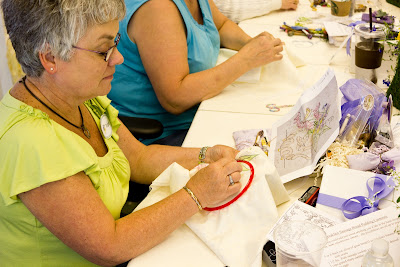 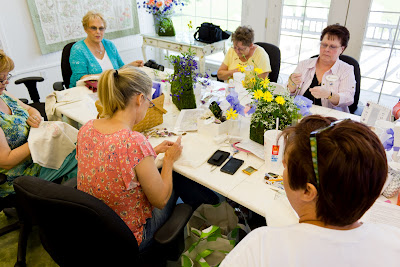 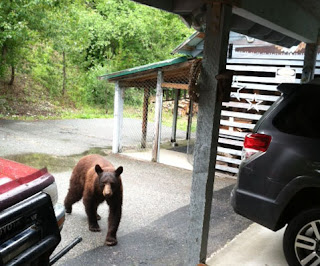 I can't believe that this weekend is the end of June!  Where the heck did it go????  We've been busy around here with the Summer Retreat and new patterns...but STILL!!!  When did the month slip away?

I'll post pictures from the retreat next week......we had SO MUCH FUN!!!!!  I was hoarse for a couple of days from all the laughing!  One of the things that happened had a little something to do with this bear............

Jan lives at Lake Wenatchee....way out in the woods above Leavenworth, WA.  She got a call from her husband on Saturday night while we were all sitting here stitching.  He was all excited... telling her how he'd had a visit from this bear that's been trying to get into their garbage.  First, he said, he went out to chase it away with a broom in one hand and gun in the other.......then, it took a swipe at their dog (missed, luckily)......THEN!  This was when Jan totally lost it and couldn't stop laughing.......he "called it every name in the book" and it STILL wouldn't leave! (Imagine THAT!!! Calling bears names USUALLY works like a charm!!!)  The gun you say??  What about the gun? Warning shots??  No.... the broom and "names" !!!!  Anyway, she sent a couple pix of the bear on it's return visits after she got home.  The game dept. has put out a live trap for it, so hopefully the problem will be solved soon.

Janice and I are stitching on another new pattern this weekend called Autumn Hopscotch (name's still possibly going to change.......everybody here thinks it's a stupid name for it.... we'll see!)  I'll take pix on Monday and post them with the retreat photos. 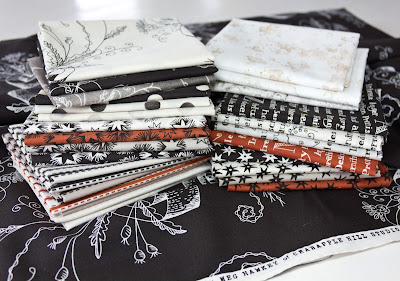 FABRIC PREVIEW!!!
We got our "pre-cuts" of the new fabric line!
Vintage Tin is almost all stitched and the piecing has begun......I'm tracing and coloring a pumpkin/gourd quilt that will use only the pumpkin colored prints.......and I'm drawing on another quilt that has a French garden theme that will use only the taupe tones.......SO EXCITED!!!!! 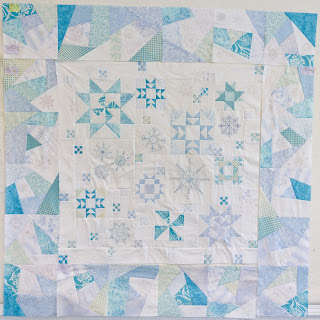 Janice got Snow Flurries all put together (at least as far as we CAN assemble it before we stitch on the borders etc....)  After all the snowflakes are embroidered, we'll have to quilt it before the beads and crystals can be added........I'm LOVING this quilt!!!!

Well...back to work!  We're getting ready for the Summer Stitching Retreat......lots of preparations for lots of FUN stuff!!!!
xo Meg 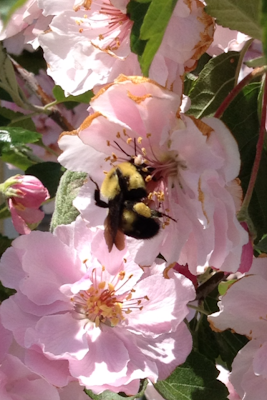 The bumblebees are buzzing away in the flowers....  They have so much pollen on their legs, it's amazing they can fly!! 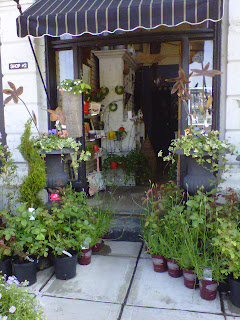 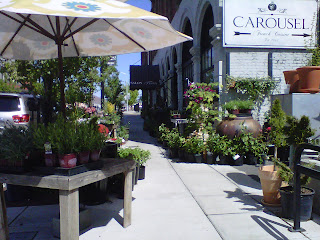 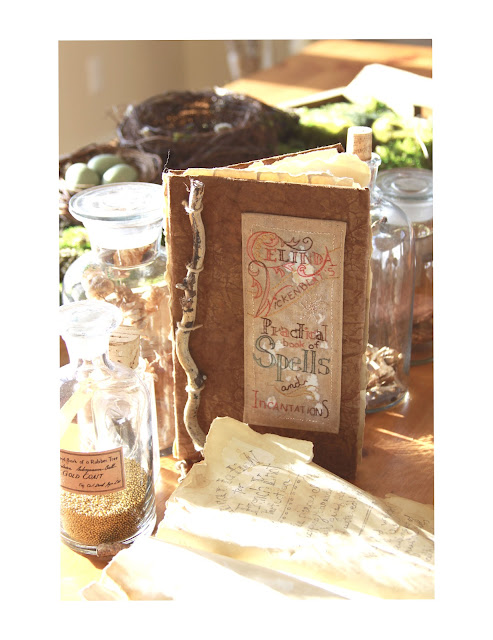 Here it is... about 90 degrees today....and we're ready for Halloween!  We'll be putting the new Halloween designs up on the website tomorrow.  This book is "Celinda Wickenblat's Spellbook".  It's really easy to make with cardboard...kraft paper....cardstock....OH!  And a little bit of stitching! There are even three spellbook pages to copy onto the cardstock to get you started! 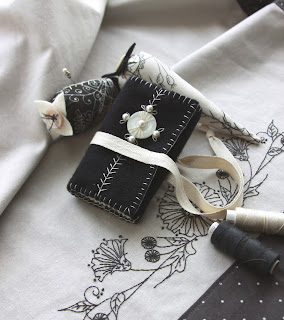 This is the Janette Needlebook and Pincushion!  It's a tri-fold felted wool needlebook that's lined in fabric. You could make it in any colorway... I just went with black because I wanted to use some of my new fabric line "Inkwell" for the pincushions. 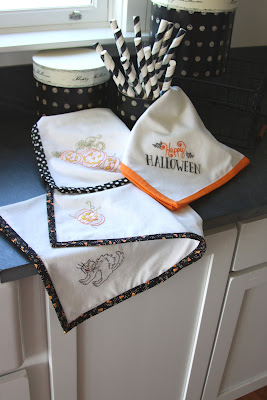 The tea towels are "Spirited Tea Towels"... I really like the bound edging and it's SO easy to do! 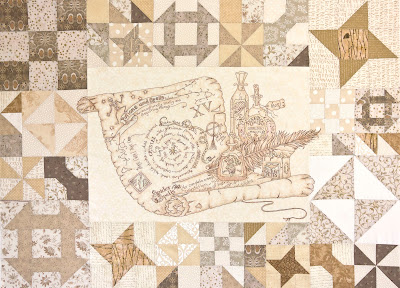 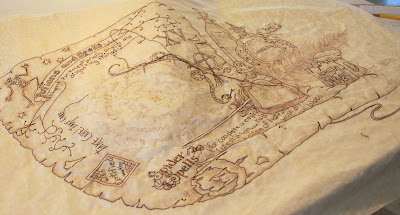 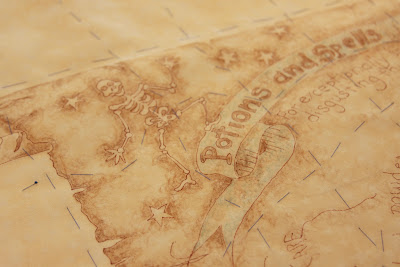 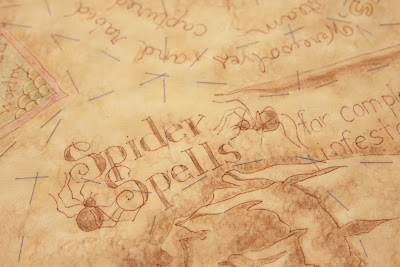 Janice has started sewing the blocks together, so we'll be ready to put it together as soon as I finish the embroidery.  I'm planning on releasing this in a few weeks with the rest of the new patterns..... WHEW!!  It's going to be a race to the finish! 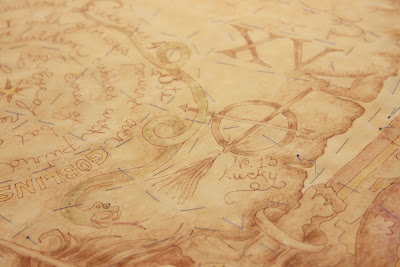 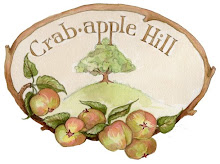 Meg Hawkey
Benton City, Washington, United States
Hi! I'm so happy to have you join our stitchery club! Stop by whenever you get a chance to just check out what's going on in the studio, share your thoughts or photos of the stitchery projects you're working on, or to download a free pattern. We're going to have so much fun together!! Stop by the Crabapple Hill website to shop my patterns and goodies at http://www.CrabappleHillStudio.com 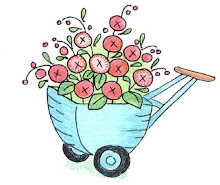